A 200-Year-Old Treasure Waiting to Be Reclaimed 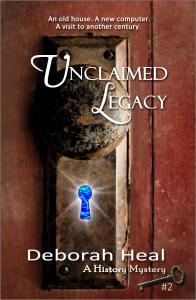 Abby Thomas’ 11-year-old student Merri is finally warming up to her. And her friendship with John Roberts is also heating up. He’s definitely marriage material. Except for the fact that when she tells him about Beautiful Houses he thinks she’s crazy.

Because a computer program that allows you to rewind and fast-forward the lives of people from long ago is surely pure fantasy. But then John sees for himself that it’s not.

Together they use Beautiful Houses to help the “Old Dears” next door with their family tree. Rummaging around in their history, they discover that the 85-year-old twins have been keeping a secret from each other since 1941. And the ladies’ ancestors have a few secrets of their own, too.

Convicted in 1871 of murder and arson, Reuben Buchanan is a blight on the Old Dears’ family name. But was he really guilty? Abby and John must get inside the mind of a murderer to find out.

But there are also heroes in the ladies’ family tree—like Reuben’s ancestor Nathan Buchanan. Abby and John’s amazing software takes them on a virtual trip back to 1803 when Nathan log cabin sat just outside Lewis and Clark’s  Camp River Dubois where the men spent the winter gathering supplies and training for their cross-continental expedition.

Nathan Buchanan’s cabin was added onto through the years, and at one time it was a stage coach inn called Shake Rag Corner. Today it is a condemned derelict. But while watching its history unfold, Abby and John discover a 200-year-old treasure waiting to be reclaimed—and that God’s promise to bless a thousand generations really is true.

Unclaimed Legacy is available in these and many other online bookstores:

The History Behind Unclaimed Legacy

Unclaimed Legacy features Lewis and Clark, two more historical heroes of mine. Much has been written about their exploits during their expedition. But I was more interested in the time they spent at Camp River Dubois the winter of 1803-04 at what would eventually become Hartford, Illinois, which is only twenty miles from where I grew up.

I don’t claim to be a historian, but I want my books to be as historically accurate as possible. (I always put a detailed disclaimer inside my book covers because I don’t want real historians to get angry if I got anything wrong.) So, as usual, I did my homework before writing Unclaimed Legacy.

I was lucky to be researching Camp River Dubois when I was, because for a century and a half, no one knew much about what transpired that winter of 1803-04. Then in 1953, Clark’s field notes were discovered in a dusty Minnesota attic. Clark had scribbled with his poor handwriting and even worse spelling on whatever random pieces of paper he could find. Although his notes are maddening in their lack of detail, a few clear facts emerged from them.

First of all, the five and half months Lewis and Clark spent in the Illinois Country were essential for the success of their mission.

While they waited for the treaty with France to be settled, Captain Lewis collected as much intelligence as he could from Nicholas Jarrot and local frontiersmen to improve their understanding, and most crucially, their maps of the west. He went to St. Louis for the final supplies they would need, for business meetings concerning the signing of the Louisiana Purchase, and for shindigs to keep the area politicians happy.

The most important trip Captain Lewis made to St. Louis was on March 10, 1804, when he attended the formal ceremony that transferred ownership of the “Louisiana Purchase” from France to the United States, thus making it legally possible for them to proceed with the expedition.

And Lewis often went to nearby Cahokia for equipment, discussions with Jarrot, and to mail letters at the post office. He and President Jefferson corresponded up until the last minute before the explorers departed.

Read more of what I learned on my journey of discovery below:

Revealing the Research In Unclaimed Legacy, Abby and John do most of their “time-surfing” in an old house that was once a stagecoach stop known as Shake Rag Corner. Although I took the liberty of fictionally relocating it for their … END_OF_DOCUMENT_TOKEN_TO_BE_REPLACED

Preparation Begins Napoleon and the French sold the “Louisiana Purchase” to the United States on April 30, 1803. Thomas Jefferson wasted no time making plans to explore the vast tract of land that would double America’s size. He commissioned Captain … END_OF_DOCUMENT_TOKEN_TO_BE_REPLACED

Captain Meriwether Lewis The five and half months Lewis and Clark spent in Illinois Country were essential. While they waited for the treaty with France to be settled, Captain Lewis collected as much intelligence as he could from Nicholas Jarrot  … END_OF_DOCUMENT_TOKEN_TO_BE_REPLACED

In a previous post I explained how and why I came up with the horrible, wife-beating character Bertram White. Even though completely imaginary, he totally creeped me out. The “Old Dears” were much more fun to imagine into existence. My … END_OF_DOCUMENT_TOKEN_TO_BE_REPLACED

THE TIME AND AGAIN TRILOGY 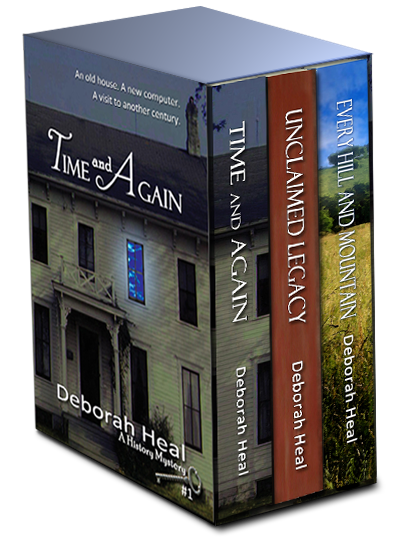 THE LOVE BLOOMS AT BETHEL SERIES

Welcome. I hope you’ll add your comments and share the posts. I really like to have your feedback.