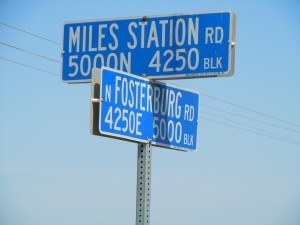 I hadn’t known the town ever existed until the road sign went up in front of my house.

I grew up not far from the setting of Time and Again but for most of those years had no idea that just down the road from me there had once been a little town called Miles Station. I didn’t hear the name until the 1980s when the county put up a new road sign in front of our farm. Miles Station Road? What’s a Miles Station, I wondered.

So I went back to the public library to take another look in some of the old history books 2) about Macoupin County and re-discovered the little lost town.

The town’s name had nothing to do with a unit of measurement (as I had first thought), and everything to do with a man named Jonathan Miles. He is described in one book as “brave, honest, patriotic, broad minded, God fearing, zealous” and in another as “one of the most prominent citizens in the county…his active part in the upbuilding and development [of the county] and his service in the late war, having made him widely and favorably known.” 3)
Jonathan Miles,  like so many Illinois settlers, was from Kentucky, born (second of eight
children) in 1820 to Alex and Mary Miles, who were “descended from good English ancestry.” Alex was a deacon in the Methodist Church (He bore the title “Reverend.”) and is described as “a good citizen, and … held in respect for his many excellent qualities as a man and a neighbor.” Alex Miles served in the Colonial Army and then in the service of the fledgling nation during the War of 1812.

In 1832, Alex moved his family, including 12-year-old Jonathan, to the new state of Illinois, settling in Brighton Township.  Miles told his biographer “there were no roads here, there being an unbroken prairie over which one could ride for miles without fence or house intercepting his progress.…It often required a week to make a trip to a mill. Wild game of all kinds, including deer was seen in abundance and supplied the table with meat.” Miles attended the little log school erected in about 1834 and later went for a short while to a school in Alton. Mostly, however, he was self-taught.

The town of Miles Station began when he built the first grain mill (steam powered) in the area. It
drew farmers from miles around and Miles (and his partners) had a successful grain business known as Gilbert, Miles, and Stanard4) in St. Louis. According to his biographer, Miles was “enterprising and industrious, [and] he had not long engaged in business before he was reaping a good income as the reward of his labors, and a successful business…made him a wealthy man.” 5)

One of those enterprises was a general mercantile 6) he established in Miles Station and another was his contract with theChicago and Alton Railroad.7) He convinced the railroad to build their line through his town and then sold them lumber with which to lay the tracks. When the railroad forgot to pay him for the lumber, Miles hired a young lawyer from Springfield named Abraham Lincoln to represent him. 8)

Jonathan married Elizabeth (Eliza) Stratton,8) also a native of Kentucky, and they had three children: Samuel, who was a merchant in Kansas; J.R. Frank, who was a real estate dealer in St. Louis; and Charlotte, who by 1891 was the widow 10) of James Moffat and living with her father. Eliza died in 1889 and Jonathan remarried (in 1890!).

Miles was associated with the Whig Party 11)and a “staunch supporter of Republican principles.” 12) When the Civil War broke out, Miles terminated his partnership with Gilbert and Stanard and did his patriotic duty. On August 9, 1861, he enlisted local volunteers and formed Company F of the Twenty-Seventh Illinois Infantry. “After drilling for a time at Camp Butler, the troops went to Cairo, ILL., and later met the enemy in battle at Belmont, MO., where the regiment showed that its men were of true mettle.” Miles’ career as a soldier was described as “brilliant.” He was promoted to colonel in 1862 and carried that title of respect for the rest of his life.

The colonel “lived a retired life for many years, occupying a commodious but modest home 13) in the quiet little village that bears his name…” He died in there on April 1, 1903.

1) Miles Station was first known as Providence, but later the name was changed to honor Jonathan Miles.

2) These are the same books from which I found so much interesting information about Woodburn.

3) One of the themes in Time and Again is the fear of being forgotten when we die.

4) O.E. Stanard went on to become governor of Missouri

5) Picture is not Miles Mill, but similar to those of the era.

6) Same thing goes for the Mercantile.

7) Abraham Lincoln was one of the first to invest in the Chicago & Illinois. The Chicago & Alton carried his funeral train on the last leg of its journey to Springfield, Illinois.

8) Lincoln won the case (of course!) along with others on behalf of area settlers.

9) I need to do more research to see if Eliza Stratton is related to the Strattons of Brighton who along with others, notably Dr. Thomas Brown, participated in the Underground Rail Road.

10) Don’t tell Abby and Merrideth! They’d be so sad to know Charlotte’s husband died so young.

11) Lincoln also was associated with the Whig Party, which morphed into the Republican Party.

12) I’m not sure if the real Jonathan Miles helped runaway slaves, but he was sympathetic to the cause.

13) The artist who designed my cover used the drawing of Jonathan Miles’ house as her model.

I had to take some liberties for the fictional world of Miles Station in Time and Again to fit together properly. For one thing, the town may not have been as developed in the 1850s as I paint it. I’m not sure of the timing of Lincoln’s case and visit to Miles Station.  And Charlotte’s mother would have still been alive when we meet Charlotte.

The History of Macoupin County: A Portrait and Biographical Record

It would be so nice of you to share!

This site uses Akismet to reduce spam. Learn how your comment data is processed.

[…] brown hair and green eyes, while home on summer break from college have adventures in Miles Station, a little town settled by Col. Jonathan Miles, a Christian […]

About Time and Again: Charlotte of Miles Station | Deborah Heal

Hello Deborah, It’s interesting that you’ve researched Miles Station. I am reading about the Underground Railroad in Macoupin county in a parallel effort with also reading Colton Whiteheads “The Underground Railroad”. What a horrible time in our history. Reading this book makes me ever mindful of all of our freedoms (African American or white).Its difficult for me to even read portions of this book as it demonstrates the cruelty and inhumanity present in that society. I confess I skip portions of it but the narrative becomes frightful . I’m also a huge fan of “mercy Street”. I traveled to Alexandria… Read more »

THE TIME AND AGAIN TRILOGY

THE LOVE BLOOMS AT BETHEL SERIES

Welcome. I hope you’ll add your comments and share the posts. I really like to have your feedback.